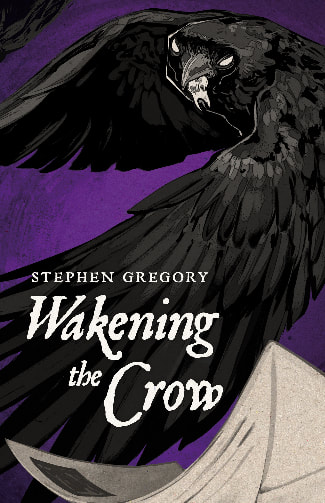 Oliver Gooch comes across a tooth in a velvet box, with a note from 1888 saying it belonged to a young Edgar Allan Poe. When he converts an old church to a bookshop selling strange and occult titles, he displays the tooth there, calling the store Poe’s Tooth Books.

But the bookstore has been bought with blood money: Oliver and his wife Rosie received a large cash settlement when their young daughter Chloe was left brain-damaged after a hit-and-run accident. Rosie hopes the child will soon return to normal, but Oliver is secretly relieved by his daughter’s condition, dreading that if she recovers she’ll reveal a terrible truth about him. Then one freezing night a raggedy, skeletal crow comes into the shop and refuses to leave. The bird infiltrates their lives, altering Oliver and Rosie’s relationship and affecting Chloe in strange ways. It becomes a dangerous presence in the firelit, shadowy old church. Inexorably, the family, the tooth, the crow, and their story will draw to a terrifying climax.
​
Wakening the Crow is an unsettling novel of creeping menace by a modern-day master of psychological horror, Stephen Gregory, award-winning author of the contemporary classic The Cormorant.

﻿Stephen Gregory (b. 1952) was born in Derby, England, and earned a degree in law from the University of London. He worked as a teacher for ten years in various places, including Wales, Algeria, and Sudan, before moving to the mountains of Snowdonia in Wales to write his first novel, The Cormorant (1986), which won Britain’s prestigious Somerset Maugham Award and drew comparisons to Poe. The book was also adapted for film as a BBC production starring Ralph Fiennes. Two more novels, both set in Wales, followed: The Woodwitch (1988) and The Blood of Angels (1994). After the publication of The Blood of Angels, he worked in Hollywood for a year with Oscar-winning director William Friedkin (The Exorcist). More recently, he has published The Perils and Dangers of this Night (2008), and his new novel, The Waking That Kills, will be published in late 2013.﻿﻿
Copyright © 2021 | PO Box 17642, Richmond, VA 23226 | 804.873.8528 | email
Banner art by M.S. Corley