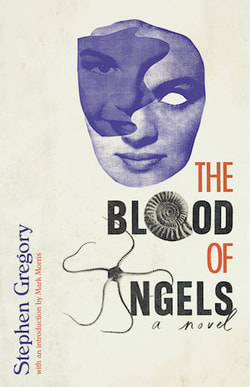 After a bruising experience as a teacher in Africa, Harry Clewe has come to the mountains of Snowdonia in Wales for some peace and quiet. One day, he stops to pick up an attractive blonde hitchhiker ... and his life will never be the same again.

A desperate and wild obsession ends in a tragedy that condemns Harry to a solitary existence, a loneliness that bears its own depraved and bitter fruit. In the years that follow, his life is changed by a bizarre and ultimately dangerous succession of women. Driven on from crisis to crisis, from one catastrophe to the next, he knows joy, terror, despair ... and finally, the horror of his own worst impulses.

From the award-winning author of The Cormorant and The Woodwitch comes this disturbing and macabre story of one man's encounter with the savagery of human instincts and the cruelty of fate.

'The Blood of Angels is a compelling, beautifully written, lusty storm of a book that will sweep you up from its first page and take you on a breathless, emotional, invigorating journey.' - Mark Morris, from the Introduction

'Stephen Gregory lures you into his feverish tales of madness and nightmare with lush, precise prose, inexorably building a sense of wonder, awe, and bone-deep dread. He's a one-of-a-kind horror writer to read and re-read.' - Paul Tremblay, author of A Head Full of Ghosts

'The Blood of Angels is a bizarre nightmare. Stephen Gregory slowly takes the reader into the depths of strange, insidious happenings and blinding personal phantoms to reveal what lies beneath. Twisted, bitter, uncomfortable in its own skin, The Blood of Angels investigates the damaging repercussions of a childhood encounter as echoes through a deteriorating life. This is a book that seeps into you and leaves an indelible mark. It's affecting, as all great literature should be.' - Simon Strantzas, author of Burnt Black Suns

Stephen Gregory (b. 1952) was born in Derby, England, and earned a degree in law from the University of London. He worked as a teacher for ten years in various places, including Wales, Algeria, and Sudan, before moving to the mountains of Snowdonia in Wales to write his first novel, The Cormorant (1986), which won Britain’s prestigious Somerset Maugham Award and drew comparisons to Poe. The book was also adapted for film as a BBC production starring Ralph Fiennes. Two more novels, both set in Wales, followed: The Woodwitch (1988) and The Blood of Angels (1994). After the publication of The Blood of Angels, he worked in Hollywood for a year with Oscar-winning director William Friedkin (The Exorcist). More recently, he has published The Perils and Dangers of this Night (2008), and his new novel, The Waking That Kills, will be published in late 2013.﻿﻿
Valancourt Books | PO Box 17642, Richmond, VA 23226 | 804.873.8528 | email
Copyright © 2022 by Valancourt Books, LLC. All rights reserved. Valancourt Books® is a registered trademark of Valancourt Books, LLC.
Banner art by M.S. Corley