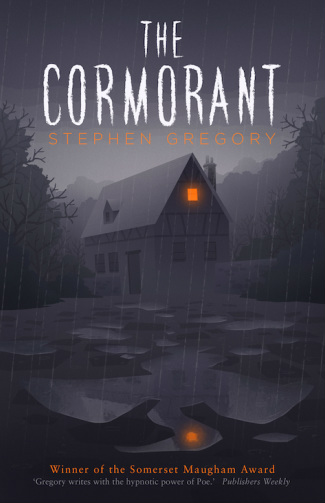 A young family receives a surprise when old Uncle Ian dies and leaves them a cottage in north Wales. For Ian’s nephew and his wife Ann, it seems a stroke of incredible good fortune, enabling them to leave their life in the city for a newfound freedom in the remote seaside cottage. There’s just one catch. Uncle Ian’s will has an unusual condition: the couple must care for his pet cormorant or forfeit the bequest. The will’s provision seems harmless enough at first, but when their young son Harry develops a strange fascination for the increasingly sinister and malevolent bird, they soon find that Uncle Ian’s gift may not be a blessing, but a curse.

The Cormorant (1986), Stephen Gregory’s first novel, received widespread critical acclaim, winning the Somerset Maugham Award and earning comparisons to the works of Poe. This edition includes a new introduction by the author, in which he reveals the inspirations for this bleak and haunting tale.

‘[A] first-class terror story with a relentless focus that would have made Edgar Allan Poe proud.’ - New York Times

‘[N]o summary can do justice to the subtlety of Gregory’s first novel, with its fresh, vivid, sensual prose and its superb descriptive and evocative power. An extraordinary novel—original, compelling, brilliant.’ – Library Journal

‘Gregory writes with the hypnotic power of Poe.’ – Publishers Weekly

‘A work of tremendous self-assurance that leaves the reader with a lingering sense of unease and announces the arrival of a considerable new talent.’ – British Book News