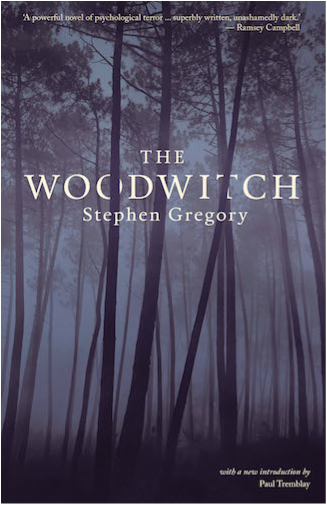 Andrew Pinkney is a young English solicitor’s clerk with boyish good looks and a gentle manner. But he also has a dark side. When his girlfriend Jennifer laughs at his impotence, he lashes out in a violent rage, knocking her unconscious. At the suggestion of his employer, Andrew heads to an isolated cottage in the dark Welsh countryside to take a break and get a grip on himself. In the woods, he discovers the grotesque stinkhorn mushroom, whose phallic shape seems to rise in obscene mockery of his own shortcomings. But the stinkhorn gives him an idea, a way to win Jennifer back. As the seeds of obsession take root in Andrew’s mind, he embarks on a nightmarish quest, with unexpected and horrifying results.

Stephen Gregory earned worldwide acclaim with his first novel, The Cormorant (1986), which won the Somerset Maugham Award and was adapted for a BBC film. In The Woodwitch (1988), his second novel, Gregory once again proves himself a master of disturbing and unsettling horror. This edition features a new introduction by Paul Tremblay.

‘A thorough reinvention of the Gothic landscape . . . Gregory’s voice and vision are wholly original.’ – Ramsey Campbell

‘A finely written and truly creepy novel with a haunting feel for decay and corruption.’ – Books

Stephen Gregory (b. 1952) was born in Derby, England, and earned a degree in law from the University of London. He worked as a teacher for ten years in various places, including Wales, Algeria, and Sudan, before moving to the mountains of Snowdonia in Wales to write his first novel, The Cormorant (1986), which won Britain’s prestigious Somerset Maugham Award and drew comparisons to Poe. The book was also adapted for film as a BBC production starring Ralph Fiennes. Two more novels, both set in Wales, followed: The Woodwitch (1988) and The Blood of Angels (1994). After the publication of The Blood of Angels, he worked in Hollywood for a year with Oscar-winning director William Friedkin (The Exorcist). More recently, he has published The Perils and Dangers of this Night (2008), and his new novel, The Waking That Kills, will be published in late 2013.﻿﻿
Valancourt Books | PO Box 17642, Richmond, VA 23226 | 804.873.8528 | email
Copyright © 2022 by Valancourt Books, LLC. All rights reserved. Valancourt Books® is a registered trademark of Valancourt Books, LLC.
Banner art by M.S. Corley