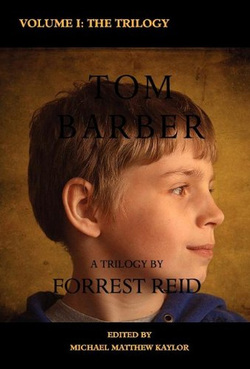 Forrest Reid (1875-1947), the Ulster novelist, spent his life in Belfast, in the north of Ireland, save for a period as an undergraduate at Christ's College, Cambridge, where he received a B.A. in 1908. He numbered among his many friends and acquaintances George William Russell (A.E.), E. M. Forster, Edmund Gosse, C. S. Lewis, and Walter de le Mare, as well as various Uranians such as Theo Bartholomew, Osbert Burdett, and Mark André Raffalovich.

Despite his sixteen novels, his two autobiographies, and a range of other works, despite being a founding member of the Irish Academy of Letters and an honorary Doctor of Letters of Queen's University in Belfast, despite his novel Young Tombeing awarded the James Tait Black Memorial Prize, Forrest Reid closely borders both oblivion and canonicity. However, this author, who has been aptly dubbed the "Arch-Priest of a Minor Cult," deserves reconsideration and perhaps a place in the pantheon of English letters.

The Tom Barber Trilogy - composed of the very distinct novels Uncle Stephen (1931), The Retreat; or, The Machinations of Henry (1936), and Young Tom; or, Very Mixed Company (1944) - is Forrest Reid's magnum opus. The present scholarly edition presents those three novels as clean texts (in Volume I), followed by a study of Forrest Reid and explanatory notes for the trilogy (in Volume II).

Reid later disowned his first two novels, The Kingdom of Twilight (1904) and The Garden God (1905). The latter novel risked controversy with its portrayal of romantic friendship between two boys; Reid dedicated it to his literary idol Henry James, who was outraged and never spoke to Reid again. After the death of Reid’s mother, a small legacy enabled him to devote himself more fully to his writing, and in the 1910s he published a string of excellent, though not commercially successful novels, including The Bracknels (1911),Following Darkness (1912) (said to have been an influence on Joyce’s Portrait of the Artist as a Young Man), At the Door of the Gate (1915), The Spring Song (1916), and Pirates of the Spring (1919).