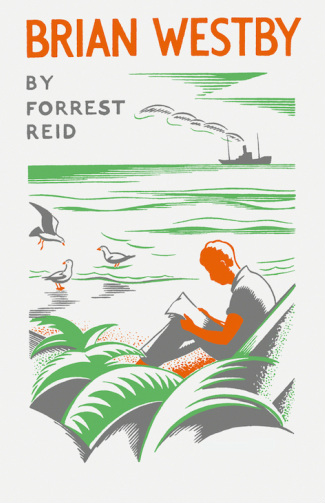 A chance meeting in 1931 between fifty-six-year-old Forrest Reid and nineteen-year-old Stephen Gilbert was a pivotal event in the lives of both men. For Reid, it was love at first sight, and his young muse was the inspiration for a string of late-career literary triumphs that culminated in the James Tait Black Prize for Young Tom as the best novel of 1944. For Gilbert, his friendship with Reid helped launch his own writing career, which saw him publish five excellent, though now neglected, novels. In Brian Westby (1934), arguably his masterpiece, Reid immortalized their meeting, recasting their relationship as father and son.

In Brian Westby, Martin Linton, an ageing novelist wondering whether he has anything left to live for, travels to the Irish seaside for his health. There, he meets Brian, the teenage son he never knew he had, and finds his passion for life reawakened as he tries to win the boy’s confidence and affection. But their burgeoning relationship is threatened by Linton’s ex-wife Stella, who believes him to be an immoral influence, and in an unforgettable climax Brian will be forced to choose between his love for his newfound father and his loyalty to the only parent he has ever known. This first-ever republication of Reid’s scarce novel includes an introduction by Andrew Doyle, an appendix containing unpublished texts by Reid and Gilbert, and a reproduction of the original jacket art.

“Few of [Reid’s] works are more poignant than his 1934 novel, Brian Westby.” – Huffington Post
​
“A study of poignant beauty and truth, written in a prose so exquisite that one almost forgets the story in the reading of it.” – Glasgow Herald

“This work is throughout light, clear, delicate, and actual; his prose remains as lucid and fluid as ever ... delightful and humorous.” – The Times

“[A] great work of art ... will take its place in the literature of our time.” – Northern Whig

“This book is clear, humorous, delicate; and it is fresh … his fluid, simple and sometimes lovely prose carries the reader without a jolt.” – Times Literary Supplement

“Mr. Reid is a master of dialogue, and his prose is a delight … a fascinating novel.” – Birmingham Post

The best of Reid’s works, though, came later in life, beginning with Uncle Stephen (1931), which, with The Retreat (1936) and Young Tom (1944), made up the Tom Barber trilogy, regarded by many as his masterpiece; the final book in the trilogy won the James Tait Black Memorial Prize as the best novel published in 1944. Reid’s other mature work includes Brian Westby (1934), inspired by Reid’s friendship with nineteen-year-old Stephen Gilbert, who also went on to become a novelist, and Peter Waring (1937) and Denis Bracknel (1947), rewritten versions of Following Darkness and The Bracknels, respectively. Reid died in 1947, critically well-regarded, but never having achieved the widespread popular recognition he deserved. When Valancourt Books reprinted The Garden God in 2007, all of Reid’s books were out of print. Valancourt is now in the process of restoring Reid’s best works to print.
Copyright © 2021 | PO Box 17642, Richmond, VA 23226 | 804.873.8528 | email
Banner art by M.S. Corley