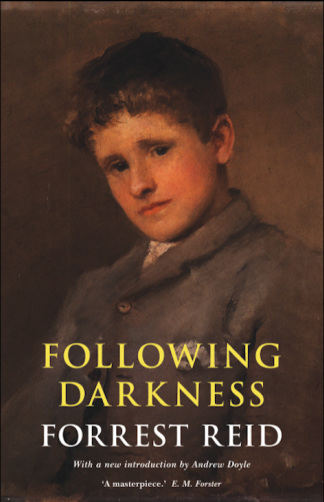 When Following Darkness first appeared in 1912, critics did not know what to make of it. Sentimental novels of childhood and adolescence were popular in the Victorian and Edwardian eras, but here was something completely new in English fiction: a book that explored a teenager’s thoughts and emotions with unflinching honesty. One leading critic denounced the novel’s protagonist Peter Waring as a ‘subject for the pathologist rather than the novelist’, an ‘evil’ character who ‘unutterably disgusts’, and the book’s allusions to Peter’s sexual awakening and his rejection of Christ disturbed contemporary readers.

Following Darkness is the story of sixteen-year-old Peter’s conflict with his staunchly religious father, whose religion and values Peter rejects with contempt, his burgeoning friendship with Owen Gill, and his growing passion for Katherine Dale. With keen psychological insight, Reid creates in Peter a complex and fascinating character: morally ambiguous, deeply flawed, snobbish, conceited and selfish, yet ultimately sympathetic. Acclaimed as a masterpiece by E.M. Forster and a possible influence on Joyce’s A Portrait of the Artist as a Young Man (1916), Following Darkness was unlike any novel that had preceded it, and it remains one of Forrest Reid’s most interesting works. This edition, the first since 1912, includes a new introduction by Andrew Doyle.

‘None of our contemporaries can describe childhood and youth as truly as he does.’ - V. S. Pritchett