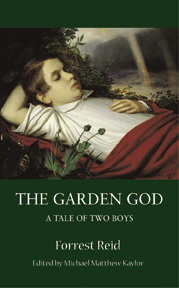 Fifteen year old Graham Iddesleigh dreams of a past life, where he frolicked in a garden with a young Greek god. However, his dreams threaten to come to an abrupt end when his father decides to send him away to school. But what is Graham's surprise when he meets a fellow schoolboy, Harold Brocklehurst, who is the very image of the Greek god of his dreams!

Graham falls deeply in love with his new friend, and the two boys spend an unforgettable summer together--until a heartbreaking tragedy occurs, a tragedy that will change Graham's life forever.

The Garden God was first published in 1905, in the wake of the Oscar Wilde trial and other scandals, and risked controversy with its undercurrents of pederastic desire. Forrest Reid dedicated the novel to his idol, Henry James, who was outraged and never spoke to Reid again. This first ever scholarly edition of the novel includes a new introduction and notes by Michael Matthew Kaylor, who dismisses the traditional view of Reid as merely a provincial novelist and argues for his inclusion among the major Uranian writers such as Pater, Wilde, and Frederick Rolfe.