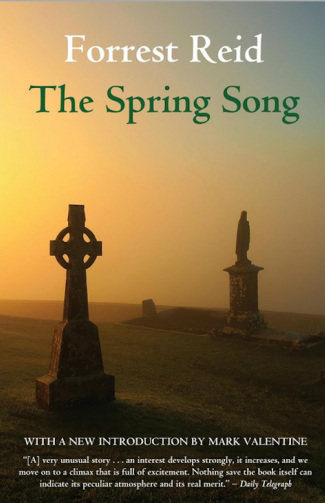 Thirteen-year-old Grif Weston and his siblings, Barbara, Ann, Jim, Edward, and Edward's friend Palmer Dorset, travel to their grandfather's home in rural Ireland, where they hope to pass an eventful summer. Unexpected dangers and adventures lurk, as the children must solve the kidnapping of their beloved dog Pouncer and thwart a burglary attempt on Grandpapa's house. Yet there is another danger, far more sinister, involving Billy Tremaine, a local boy who died at age fourteen in a tragedy no one wants to talk about.

When Grif hears a mysterious figure singing an old tune called "The Spring Song," old Mr. Bradley tells him that it's Billy's ghost, trying to lure Grif into joining him in the world of the dead; shortly afterwards Grif falls ill with an inexplicable sickness. But Palmer Dorset, an avid reader of Sherlock Holmes tales, is determined to solve these mysteries, and he'll risk every danger to find the truth behind Mr. Bradley's ghastly stories and Grif's unexplainable illness. . . .

Forrest Reid (1875-1947) is unequaled among English-language writers in his novels of boyhood and adolescence. In The Spring Song (1916), he weaves a classic boys' adventure tale with a chilling ghost story in the vein of Henry James’sThe Turn of the Screw. This edition, the first since the novel's original publication, is newly typeset from the original edition and features a new introduction by Mark Valentine.

“For this reissue of The Spring Song … and for other titles, we owe a debt of gratitude to the publisher Valancourt, whose aim is to resurrect some neglected works of literature, especially those incorporating a supernatural strand, and make them available to a new readership.” – Patricia Craig, Times Literary Supplement
​
“[A] very unusual story [...] an interest develops strongly, it increases, and we move on to a climax that is full of excitement. Nothing save the book itself can indicate its peculiar atmosphere and its real merit.” – Daily Telegraph

“A book of distinction and charm.” – New York Times

“There are few contemporary stories of childhood reaching the artistic height of The Spring Song.” – Springfield Republican

The best of Reid’s works, though, came later in life, beginning with Uncle Stephen (1931), which, with The Retreat (1936) and Young Tom (1944), made up the Tom Barber trilogy, regarded by many as his masterpiece; the final book in the trilogy won the James Tait Black Memorial Prize as the best novel published in 1944. Reid’s other mature work includes Brian Westby (1934), inspired by Reid’s friendship with nineteen-year-old Stephen Gilbert, who also went on to become a novelist, and Peter Waring (1937) and Denis Bracknel (1947), rewritten versions of Following Darkness and The Bracknels, respectively. Reid died in 1947, critically well-regarded, but never having achieved the widespread popular recognition he deserved. When Valancourt Books reprinted The Garden God in 2007, all of Reid’s books were out of print. Valancourt is now in the process of restoring Reid’s best works to print.
Copyright © 2021 | PO Box 17642, Richmond, VA 23226 | 804.873.8528 | email
Banner art by M.S. Corley