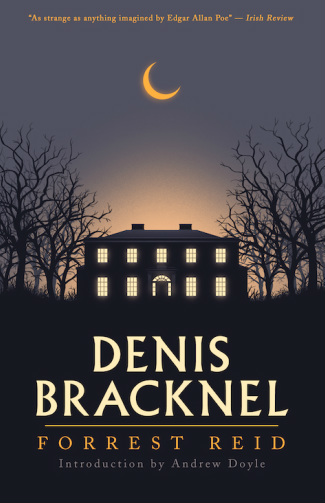 At the end of his life, Forrest Reid (1875-1947) extensively revised his novel The Bracknels (1911), which had been acclaimed by critics and whose admirers included E.M. Forster and D.H. Lawrence; the result was the posthumously published Denis Bracknel (1947), and it remains one of his finest achievements. A story in the tradition of Henry James’s The Turn of the Screw and with a slow-building dread reminiscent of the works of Sheridan Le Fanu, Reid’s novel opens with the arrival of young tutor Hubert Rusk, just down from Oxford, at the home of the well-to-do Bracknel family. Though the entire family is odd, none of them is stranger than Rusk’s pupil, fifteen-year-old Denis, a highly imaginative, unworldly boy who is attuned to the occult and performs bizarre rituals by moonlight. As Rusk befriends Denis and gains his trust, he gradually learns the startling and horrific truth behind the boy’s behaviour and will have to struggle to save him from a terrible fate . . .

This new edition is the first-ever republication of Reid’s final novel and features a new introduction by Andrew Doyle and rare and previously unpublished archival materials, including photographs and letters.

“An admirable novel... the author has drawn this charming unearthly boy with extraordinary sympathy and penetration.” – Manchester Guardian

“A work of rare distinction. . . . more than brilliant; it is actual; it is true; it is an accurate reproduction of an experience.” – Daily News

“A remarkable novel … it is as fine a piece of work as we have come upon for a long time.” – Daily Chronicle