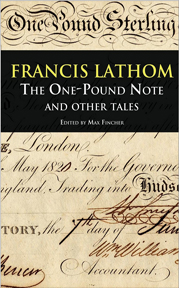 "With the publication of The One-Pound Note, and Other Tales (1820) by Francis Lathom, Valancourt Books continues its valiant mission to make available to both scholars and laypeople alike some once popular but now little known literary classics. Students of the Gothic and Scottish literature will be particularly intrigued by this collection of three stories that grants a fuller picture of Lathom's literary development and the influence of Sir Walter Scott and the vogue for what became known as the 'Scotch novel' on his work. This collection evidences a Lathom more confident in his literary enterprise after a decade-long hiatus from writing, a Lathom whose greater abilities may actually have lain in a domain outside of Gothic fiction." - Prof. Carol Margaret Davison, University of Windsor

Between 1795 and 1809, Francis Lathom (1774-1832) established himself as one of the most popular and prolific novelists of his day with Gothic novels such as The Midnight Bell (1798) and The Mysterious Freebooter (1806) before disappearing without a trace. In 1820, Lathom made his triumphant return to the literary scene with this collection of three tales.

In the title story, things seem to be looking up for young William McTavish after he wins a fortune in the lottery. But much to his horror, he arrives home to find his father on the scaffold to be hanged for having forged a one pound note! In the nick of time, a handsome stranger rescues William's father, and the two youths go on the run from the law, forging a passionate friendship that will end in tragedy. In the words of critic Montague Summers, "although most discreetly treated, the love between [the two youths] is clearly" queer in nature. The second story, "The Wife, the Mistress, and the Friend" is a tale of domestic intrigue concerning the suspicious doings of Amelia Woodville's husband, and the final tale, "The Prophecy," is a supernatural-tinged novella of skulduggery and adventure in 17th century Scotland.

This edition, the first since 1820, features a new introduction and notes by Max Fincher, the text of contemporary reviews, and a facsimile of the original title page.

In 1820, Lathom returned to publishing, releasing Italian Mysteries and the collection The One-Pound Note and Other Tales. He continued to write throughout the remainder of the decade; these later works include Live and Learn (1823), in which the friendship between the two male characters was felt by Summers to be “clearly” queer in nature, as well as two additional collections of short stories and the novels Young John Bull (1828) and Mystic Events (1830). Lathom is said to have died in Fyvie, Aberdeenshire, Scotland in 1832.
Valancourt Books | PO Box 17642, Richmond, VA 23226 | 804.873.8528 | email
Copyright © 2022 by Valancourt Books, LLC. All rights reserved. Valancourt Books® is a registered trademark of Valancourt Books, LLC.
Banner art by M.S. Corley