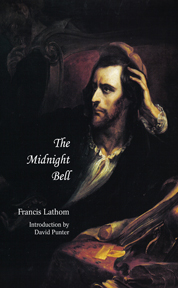 Young Alphonsus Cohenburg enters his mother's bedroom and finds her covered in blood. She tells him his uncle has murdered his father, and orders him to flee Cohenburg castle forever to save his own life!

A disconsolate exile, Alphonsus wanders the earth seeking the means of survival, first as a soldier, then a miner, and finally as sacristan of a church, where he meets the beautiful Lauretta. They wed and establish a home together, and everything seems to promise them a happy future. But their domestic tranquillity is shattered, when a band of ruffians kidnaps the unfortunate Lauretta! Alphonsus must solve the mystery of Lauretta's disappearance and the riddle of his mother's strange conduct. And when he hears that ghosts inhabit Cohenburg castle, tolling the great bell each night at midnight, the mystery only deepens….

One of the greatest of all Gothic novels, The Midnight Bell (1798) features a blend of fast-paced action and spine-tingling suspense, pervaded throughout by a tone of profound melancholy. This edition, the first in forty years, features a new introduction by David Punter, one of the world's foremost experts on Gothic literature.