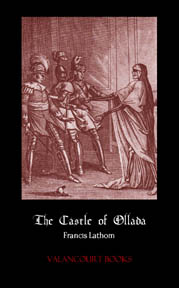 In The Castle of Ollada, young Altador seeks to solve the mystery of the ancient Castle of Ollada and win the love of the beautiful Matilda. Why does his uncle, the Baron Garcia, refuse to inhabit the castle? And what is the bloodstained spectre that the servants have seen haunting its ruined halls?

An immediate success when first published in 1795, The Castle of Ollada was the first novel by celebrated Gothic writer Francis Lathom, who wrote it at age twenty.

This edition includes the unabridged text of the 1831 edition, as well as a new introduction revealing never before published information on the life and works of Francis Lathom.  The complete text of two contemporary reviews is also included to illustrate the novel's reception when first published.

In 1797, Lathom married Diana Ganning, daughter of Daniel Ganning, a wealthy lawyer and landowner, with whom he had three children, Henry Daniel (b. 1799), Frederick (b. 1800), and Jessy Ann (b. 1803). The following year, he published what became his most famous novel, The Midnight Bell (1798), which was mentioned in Jane Austen’sNorthanger Abbey (1818) and which was the only of Lathom’s novels reprinted in the 20th century. He followed this success with the satire Men and Manners (1799), described by critic Montague Summers as Lathom’s masterpiece and worthy of a young Dickens, and Mystery (1800), a curious mixture of the Gothic with epistolary domestic romance.