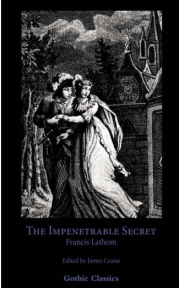 The Impenetrable Secret, Find it Out! (1805)
Francis Lathom, Edited by James Cruise

Averilla del Alvaretti is set to marry the Conte della Piacca, forced into the union by her unfeeling uncle, when she meets the handsome Sylvio di Rosalva and falls in love with him.  But Sylvio's behaviour and origins are mysterious, and despite his professions of love, he abruptly breaks off the connection, sending Averilla a mortifying letter saying he never loved her.

Averilla marries the Conte della Piacca, who, she is pleased to find, is a kind and generous man, and not the tyrant she had imagined.  Then, one night at a party with her husband, Averilla catches sight of Sylvio -- only he claims not to know her!  Then, when Sylvio is summoned to court for allegedly breaking a promise to marry, and tells a tale different than the one he had told her, the mystery deepens.  But there is more at stake in the trial than the broken marriage promise -- as the hearing unfolds, a terrible tale of poisoning, blackmail, and murder will be exposed!

A delightful blend of mystery, romance, and Shakespearean intrigue, with an undercurrent of Gothic horror, The Impenetrable Secret, Find it Out! is one of Francis Lathom's most enjoyable and lighthearted novels.  Critically acclaimed on its initial release in 1805, the novel has been out of print since 1831.  This edition includes a new introduction by James Cruise which addresses the recurring theme of secrecy in eighteenth century literature, and analyses Lathom's novel within this broader framework.

In 1820, Lathom returned to publishing, releasing Italian Mysteries and the collection The One-Pound Note and Other Tales. He continued to write throughout the remainder of the decade; these later works include Live and Learn (1823), in which the friendship between the two male characters was felt by Summers to be “clearly” queer in nature, as well as two additional collections of short stories and the novels Young John Bull (1828) and Mystic Events (1830). Lathom is said to have died in Fyvie, Aberdeenshire, Scotland in 1832.
Copyright © 2021 | PO Box 17642, Richmond, VA 23226 | 804.873.8528 | email
Banner art by M.S. Corley