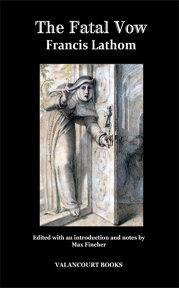 After a falling-out with his father, Reginald de Brune travels to St. Michael's Monastery for a short stay. There, one night at midnight, he observes a beautiful young woman, Christabelle, swearing a mysterious vow at the altar. The two quickly fall in love, but Christabelle's father has other plans, deciding to immure her in a convent, where she is terrorized by a cruel abbess.

But there is more to both Reginald and Christabelle than meets the eye, and quickly the two find themselves caught up in the intrigues of Henry II, his queen, Eleanor of Aquitaine, and their two warring sons, Princes Richard and John. Can the two lovers unravel the mysteries that surround their origins and survive the plots of their enemies?

The Fatal Vow; or, St. Michael's Monastery (1807) is an inventive mix of an early historical novel with aspects of Gothic terror that remains thrilling even two centuries after its first publication. This edition reprints the unabridged text of the very rare first edition, of which fewer than five copies are known to survive worldwide. Also featured are a new introduction and notes by Gothic scholar Max Fincher.

In 1820, Lathom returned to publishing, releasing Italian Mysteries and the collection The One-Pound Note and Other Tales. He continued to write throughout the remainder of the decade; these later works include Live and Learn (1823), in which the friendship between the two male characters was felt by Summers to be “clearly” queer in nature, as well as two additional collections of short stories and the novels Young John Bull (1828) and Mystic Events (1830). Lathom is said to have died in Fyvie, Aberdeenshire, Scotland in 1832.
Copyright © 2021 | PO Box 17642, Richmond, VA 23226 | 804.873.8528 | email
Banner art by M.S. Corley