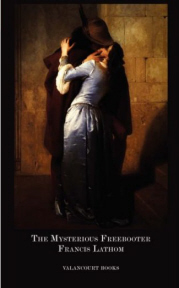 The Mysterious Freebooter; or, The Days of Queen Bess (1806)
Francis Lathom, Introduction by James D. Jenkins

The year is 1587. Conflicts with Scottish borderers and rampaging banditti threaten England's peace and security, and Queen Elizabeth orders Lord William de Mowbray to fortify his castle against the invaders. Meanwhile, within the castle, Lord William's daughter Rosalind has fallen in love with the orphan Edward and will do anything to avoid a forced marriage with the sinister Lord Rufus de Madginecourt.

Incensed at learning of Rosalind's love for Edward, Lord William sends him to Flanders, where he arranges to have him unjustly imprisoned. With her Edward unable to protect her, can Rosalind withstand the combined persecutions of her father and Lord Rufus? Who is Allanrod, the mysterious Scottish freebooter who seems determined to possess her? And what is the bloodstained spectre clad in black armour the servants have seen haunting the castle grounds?

An incredible success when it first appeared in 1806, The Mysterious Freebooter was Francis Lathom's most popular novel and one of the bestselling novels of the first half of the nineteenth century. This new edition makes The Mysterious Freebooter - which is as entertaining and suspenseful today as when it was first published - available to new generations of readers.