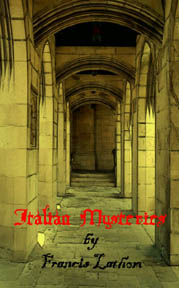 "He drew aside the covering which concealed the face of the subject ... guess, if you can, the horror, the astonishment, when, in the countenance of the deceased, I beheld my own mother!"

The worthy doctor Urbino di Cavetti is kidnapped and led blindfolded to the bedside of a young woman. A mysterious nobleman offers him an immense fortune if he will consent to cure her...of her life! Horrified, Urbino refuses to murder her, and must flee his native Venice with his family to avoid the powerful stranger's vengeance.

They flee to the isolated Castello della Torvida, which local peasants affirm to be haunted. But the spectre the servants see and the supernatural warnings the family receives are the least of their worries when Urbino's niece, the lovely Paulina, is kidnapped by the lascivious Marchese di Valdetti.

Confined a prisoner in Valdetti's castle, Paulina must choose: become the Marchese's wife, or fall victim to his insatiable lust! Can her friends penetrate the mysteries of the haunted castle and save Paulina in time?

With a colourful cast of characters and an intricate plot, Italian Mysteries was among Francis Lathom's most successful Gothic novels. This edition, the first since 1820, includes a new introduction and explanatory notes for modern readers.

In 1820, Lathom returned to publishing, releasing Italian Mysteries and the collection The One-Pound Note and Other Tales. He continued to write throughout the remainder of the decade; these later works include Live and Learn (1823), in which the friendship between the two male characters was felt by Summers to be “clearly” queer in nature, as well as two additional collections of short stories and the novels Young John Bull (1828) and Mystic Events (1830). Lathom is said to have died in Fyvie, Aberdeenshire, Scotland in 1832.
Copyright © 2020 | PO Box 17642, Richmond, VA 23226 | 804.873.8528 | email
Banner art by M.S. Corley