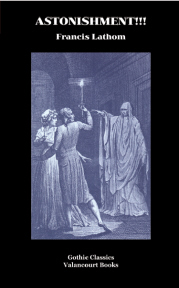 Young Claudio di Bartelma leaves the home of his adoptive father, the Marchese di Bartelma, to attend university at Rome. There, he befriends the handsome and mischievous Lodovico di Ponta. Together, the two youths become involved in a variety of amorous pursuits and humorous adventures.

But their fun is short-lived, as events quickly take a turn for the sinister. A mysterious pilgrim seems to stalk their steps, and Claudio is drawn into an affair with an enigmatic older woman, Viola, who lives in splendour but yet claims to be imprisoned. Meanwhile, Claudio investigates the truth of his parentage. Who were his parents, and what is his connection to Lodovico's father, the Count di Ponta, who many years ago was involved in a murderous love affair with his brother's wife? Midnight meetings among ruins, supernatural warnings, and a vengeful spectre will help to reveal the shocking truth behind the strange mysteries!

A clever mix of Bildungsroman, picaresque tale, mystery, and Gothic horror, Astonishment!!! (1802) shows Francis Lathom at the height of his powers. This new edition, the first since 1821, includes the unabridged text of the first edition, a reproduction of the first edition's title page, and the complete text of two contemporary reviews.

In 1820, Lathom returned to publishing, releasing Italian Mysteries and the collection The One-Pound Note and Other Tales. He continued to write throughout the remainder of the decade; these later works include Live and Learn (1823), in which the friendship between the two male characters was felt by Summers to be “clearly” queer in nature, as well as two additional collections of short stories and the novels Young John Bull (1828) and Mystic Events (1830). Lathom is said to have died in Fyvie, Aberdeenshire, Scotland in 1832.
Valancourt Books | PO Box 17642, Richmond, VA 23226 | 804.873.8528 | email
Copyright © 2022 by Valancourt Books, LLC. All rights reserved. Valancourt Books® is a registered trademark of Valancourt Books, LLC.
Banner art by M.S. Corley