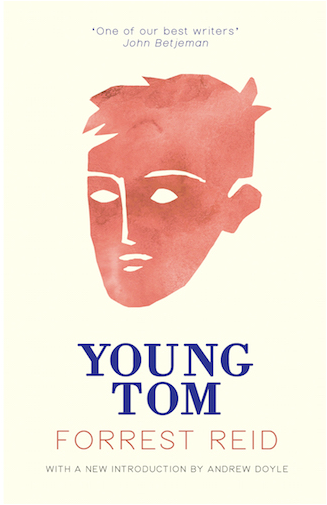 Young Tom (1944) completes the trilogy of novels featuring Tom Barber, which began with Uncle Stephen (1931) and The Retreat (1936), and it is probably Forrest Reid’s finest achievement. Acclaim from contemporary critics was unanimous, and the book won the James Tait Black Memorial Prize as the best novel of the year.

In many ways, ten-year-old Tom is like other boys: his life centres on his parents, school, and his best friend Pascoe. But he also has another existence, equally real, in his dreams and imagination. In this novel, we follow him as he plays with his three canine companions, Barker, Pincher and Roger, befriends and communicates with a rat and a squirrel, and tries to find out what happened to Ralph Seaford, who died at age ten and whose ghost now haunts Tom’s grandmother’s attic. In exquisite prose, without sentimentality, exaggeration, or a single false note, Forrest Reid brings to life Tom, his greatest creation, and accomplishes the difficult feat of allowing readers to revisit and experience anew the wonders and mysteries of childhood. This edition features a new introduction by Andrew Doyle and a selection of never-before-published photographs.

‘Mr. Reid’s handling of the fantastic and supernatural is extremely skilful, almost too skilful sometimes . . . His three books about the childhood of Tom will probably remain as one of the most original and most perfect works of imagination of his time.’ – Edwin Muir

‘He plunges off into the fantastic; he makes animals speak; he conjures up ghosts; he hints at magic; and he brings you into a world of dreams . . . he is one of our best writers’ – John Betjeman

‘It has a charm and freshness, it is beautifully written’ – James Hanley, New English Weekly