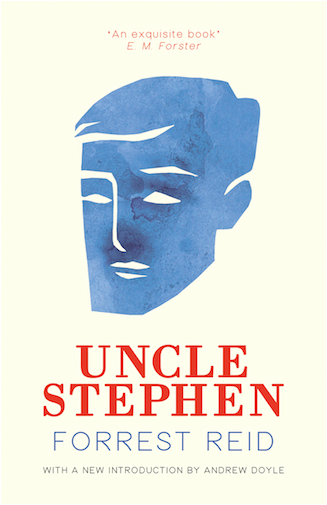 Left in the care of his unloving stepmother after his father’s death, sixteen-year-old Tom Barber has a vivid dream one night in which he sees his Uncle Stephen, whom he has never met and who is rumoured to have been mixed up in scandal and the practice of black magic. Unhappy at home and not knowing what to expect when he arrives at Uncle Stephen’s manor house, Tom runs away, hoping to live with his uncle. In his depiction of Tom’s initiation into Uncle Stephen’s mystic creed, his illicit love for the poacher Jim Deverell, and his adventures with Philip, a mysterious boy with a strange and fantastic connection to Uncle Stephen’s past and Tom’s future, Forrest Reid’s artistic vision finds its fullest expression.

The first in Reid’s Tom Barber trilogy, Uncle Stephen (1931) is both a tale of boyhood adventure in the tradition of Mark Twain and a story of the supernatural in the vein of Sheridan Le Fanu and Walter de la Mare. This new edition of the book E. M. Forster considered Reid’s masterpiece features a new introduction by Andrew Doyle along with never before published photographs and archival materials.

‘No other novelist of today can recapture more clearly than Mr. Reid the sense of early wonder and adventurous childhood.’ – The Times

‘Never to be classed with the popular run-of-the-mill books but to be sought after eagerly by those who long to escape from today’s iron realism.’ – Saturday Review

‘If you can appreciate fine words and sensitive feelings and fantastic situations, Uncle Stephen is your book.’ – Time and Tide