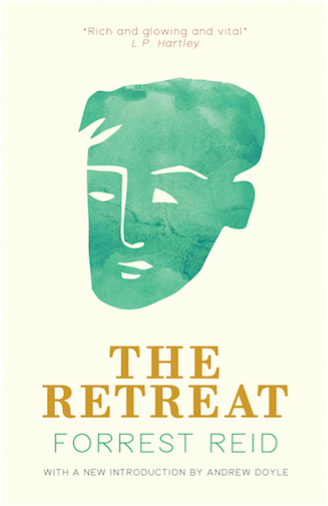 The Retreat opens with a vivid dream about an evil sorcerer and his boy apprentice. The dreamer is Tom Barber, age 13, who, like many intelligent and sensitive children, moves between the world of everyday life and that of the imagination. “I pretend things, and all at once they become real,” Tom says, and they become real for the reader as well, as we follow him over the course of one summer during which the lines between reality and fantasy are frequently blurred. In his depiction of Tom’s fantastic adventures in an unseen world – his attempts to thwart the malign influence of the cat Henry, whom he has observed scratching cabbalistic symbols on the gravel path; his meetings with the beautiful boy-angel Gamelyn; his conversations with animals; his experiences in the Garden of Eden – Forrest Reid’s delicate artistry is at its finest and most delightful.

“He writes with such ease and simplicity, his stories, always unusual, are so exquisitely told, and when, as often happens, he takes you into regions not too far distant from fairyland, he has only to wave his wand to make you believe.” – Ralph Straus, Sunday Times

“A book of fine and haunting quality.” – Dublin Magazine

“He has a simple story to tell, but he tells it with the fastidious craftsmanship of a Flaubert or a Turgenev, and because it is told supremely well it lives in the memory long after more strident dramas have been forgotten. . . . [The Retreat] is a book which everyone who has not wholly lost touch with his youth will be certain to enjoy.” – Irish Independent

“Mr. Reid is one of the most remarkable living fantasists . . . [A]t once charming and a psychological tour de force.” – London Mercury