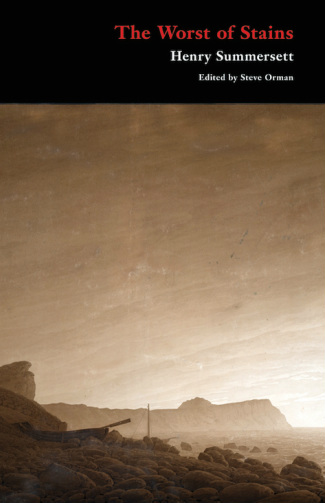 The Worst of Stains (1804)
Henry Summersett, Edited by Steve Orman

After critics condemned his sensational Gothic novel Martyn of Fenrose; or, The Wizard and the Sword (1801) as blasphemous, Henry Summersett returned with the very different The Worst of Stains (1804), ostensibly a moral tale about the importance of marital fidelity, but ironically featuring an ending far more horrific than anything found in his Gothic novels.

The Worst of Stains opens on a cold winter's night, when the village sexton, Gabriel Fellers, and his wife Mary have their quiet evening by the fireside interrupted by the arrival of a frantic stranger at their cottage door. The unexpected visitor is a young mother, driven mad with illness and shame, having been seduced and deserted by a rakish libertine. In a fit of insanity, she kills herself, leaving her infant, William Berrington, to be raised by the sexton's family.

Despite the stain of being born out of wedlock, Berrington grows into a fine young man and wins the love of the beautiful Lorina. But their domestic felicity is fated not to last: Berrington's friend Russel sows the seeds of jealousy in Lorina's mind, telling her that her husband is having an affair with the unprincipled Lady Augusta Hartley. Slowly and insidiously, Lorina observes the signs of her husband's supposed adultery while the wicked Russel schemes to win his friend's wife for himself. But Russel's machinations have unexpected consequences and will lead to a grisly and unforgettable climax . . .

An updating of Shakespeare's Othello, Summersett's tale of love, jealousy, vengeance, and murder was first published in 1804 in an edition now so rare that only one copy is known to survive. This first-ever republication of the novel features a new introduction and notes by Steve Orman of Canterbury Christ Church University and a reproduction of the title page of the original edition.