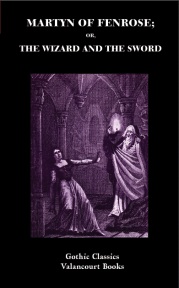 Martyn of Fenrose; or, The Wizard and the Sword (1801)
Henry Summersett

Domestic tranquillity reigns at the castle of Lord Alwynd, where the noble lord lives in happiness with his two adopted children, William and Agatha, his cousin Celwold, and Celwold's ward, Edward. But their peace is threatened when Alwynd is summoned to battle against the treacherous De Stacey.

On his way to war, Alwynd meets the wizard Martyn of Fenrose, but even the magical sword he gives to Alwynd is not enough to save the hero from death! Now William, Agatha, and Edward find themselves wholly in the power of the scheming Celwold and his cruel concubine, Lady Mercia. The three youths, with the help of Martyn of Fenrose, must solve the mystery of their origins and escape Celwold's tyranny. But who is Martyn, and why does he seem to be all-powerful and immortal?

First published in 1801, Martyn of Fenrose; or, The Wizard and the Sword shocked contemporary critics, who condemned it as blasphemous. Summersett's novel is strikingly original and is written in an unusual, almost Shakespearean style. This edition, the first since its original publication, reprints the complete text of the three volume first edition (which survives in only about five copies worldwide), and also includes the complete text of two contemporary reviews.