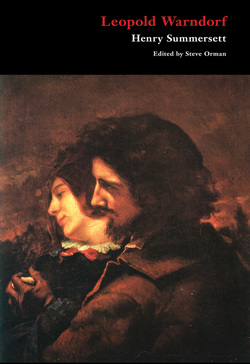 Henry Summersett, the author of a number of extremely scarce Gothic romances with lurid, alluring titles like Mad Man of the Mountain, Final Retribution, and The Wizard and the Sword, is one of the most fascinating and mysterious of the forgotten novelists of the long eighteenth century. His dark, brooding, and often shocking novels, told in a unique prose style influenced heavily by Shakespearean tragedy and German Romanticism, are intriguing rediscoveries that will be of great interest to scholars and fans of classic Gothic fiction alike.

In Leopold Warndorf (1800), Summersett combines the two dominant modes of popular fiction of the era, infusing a sentimental novel with a heavy dose of Gothic gloom. The title character is a young man of beauty and virtue who finds himself unjustly shunned by the world because his birth was illegitimate. Many years earlier, the libertine Baron Altenburg had seduced Leopold’s mother, the ingenuous Josephine, who then died in childbirth. The unhappy outcast Leopold begins to see a brighter future ahead when he falls in love with the lovely and charming Augusta and plans to wed her. But little does he know that Augusta is in fact his sister, another illegitimate offspring of the rakish Baron. The unsuspecting Leopold is faced with tragedy on both sides: will he unknowingly consummate an incestuous marriage with his sister, or will he discover the truth and instead be forced to resign the only love he has ever known?

Published by the legendary Minerva Press in 1800, Summersett’s powerful novel has never before been reprinted and is known to survive in only two copies worldwide. This new edition reprints the unabridged text of the original two-volume edition from the copy in the British Library and features a new introduction and notes by Steve Orman of Canterbury Christ Church University. Valancourt Books has previously published Summersett’s Mad Man of the Mountain (1799) and Martyn of Fenrose (1801), and several of Summersett’s other rare works, also edited by Orman, are forthcoming.