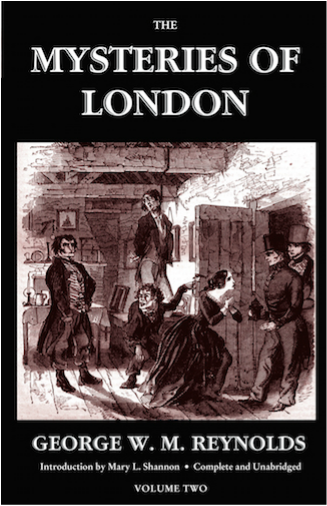 Picking up right where the first volume left off, this second volume of George W.M. Reynolds's The Mysteries of London continues and concludes the epic story. The virtuous hero, Richard Markham, is hot on the trail of the ferocious villain Anthony Tidkins, the "Resurrection Man", while the enigmatic George Montague Greenwood continues his rise to wealth and power. And in this volume, we meet new characters: Katherine Wilmot, an innocent girl falsely accused of murder; Gibbet, the deformed son of the public executioner; Lord Ravensworth, whose dastardly brother Gilbert Vernon plots his demise; the Marquis of Holmesford, a debauched libertine; young Albert Egerton, whose fortune becomes the target of the notorious rogues Arthur Chichester and Sir Rupert Harborough; and many more.

From the majestic ballrooms of Buckingham Palace and the great houses of the aristocracy to the lowest drinking and gambling dens and the bowels of Newgate prison and Bethlem madhouse, Reynolds's novel sweeps the reader along at a breakneck pace, leaving no part of the great metropolis unexplored as it uncovers the sensational mysteries of Victorian London.

Originally published as a "penny dreadful" and sold in weekly installments for a penny each, The Mysteries of London was the best-selling novel of its era, selling more than 50,000 copies per week and over a million in the course of a decade. But as readers of this new edition will discover, Reynolds's novel is no mere antiquarian curiosity: it is an unputdownable page-turner and a classic of Victorian fiction that deserves to be ranked with Dickens's Bleak House and Trollope's The Way We Live Now. This edition reprints the unabridged text of the 1846 first edition, including all its illustrations, and includes a new introduction by Mary  L. Shannon

This edition, the first in over 100 years, includes the unabridged text of the complete first series of The Mysteries, including its illustrations, more than fifty in all, and features a new foreword by Victorian scholar Louis James and annotations by Dr. Dick Collins.

Reynolds was a prolific writer, publishing novels, short stories, and nonfiction articles, some of which were original, some plagiarized. Reynolds’s Pickwick Abroad (1837-38) shamelessly borrowed from Charles Dickens’s Pickwick Papers (1836-37), as did his Master Timothy’s Bookcase (1841-42), which was based on Dickens’s Master Humphrey’s Clock (1839). In 1844, Reynolds published The Mysteries of London,modeled on Les Mystères de Paris by Eugène Sue. Reynolds’s Mysteries was wildly successful, selling over a million copies within a decade. Reynolds would go on to write over twenty serialized novels, including Wagner, the Wehr-Wolf (1846-47), The Coral Island (1848-49), and The Rye House Plot (1853-54). His oeuvre included historical and gothic fiction, along with tales of adventure that frequently featured violence, gore, and licentious female characters. Reynolds’s fiction primarily targeted a lower- and middle-class readership and was enormously popular.