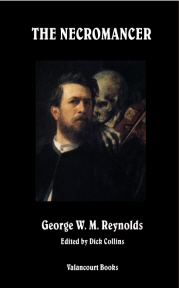 The beautiful, yet icy Musidora Sinclair hides a deadly secret. Once radiant and exuberant, her manner has become unnaturally cold and reserved. Even when wooed by King Henry VIII, who proposes to make her Queen of England, she responds only with seeming indifference. What is the explanation for her unusual behaviour?

And then there is another mystery, much more terrible. On the Isle of Wight stands the ruined Castle of Danvers, whose forbidding walls conceal unspeakable horrors. In its Chamber of Mysteries, the names of five women are emblazoned in letters of fire -- five women all seduced to a horrible fate by members of the Danvers family. What is the connection among these women? And what is Musidora's role in this diabolical affair?

George W. M. Reynolds was the best-selling novelist of the Victorian era, much to the chagrin of his rivals Dickens and Thackeray. In The Necromancer (1851-2), a complex yet action-packed narrative spanning 150 years, he is at his best. This new edition, the first in over 120 years, includes the unabridged text of the original edition, as well as a new biographical sketch by Dick Collins, which corrects the errors of previous scholars and gives the first-ever accurate look at the details of Reynolds's life.

Reynolds was a prolific writer, publishing novels, short stories, and nonfiction articles, some of which were original, some plagiarized. Reynolds’s Pickwick Abroad (1837-38) shamelessly borrowed from Charles Dickens’s Pickwick Papers (1836-37), as did his Master Timothy’s Bookcase (1841-42), which was based on Dickens’s Master Humphrey’s Clock (1839). In 1844, Reynolds published The Mysteries of London, modeled on Les Mystères de Paris by Eugène Sue. Reynolds’s Mysteries was wildly successful, selling over a million copies within a decade. Reynolds would go on to write over twenty serialized novels, including Wagner, the Wehr-Wolf (1846-47), The Coral Island (1848-49), and The Rye House Plot (1853-54). His oeuvre included historical and gothic fiction, along with tales of adventure that frequently featured violence, gore, and licentious female characters. Reynolds’s fiction primarily targeted a lower- and middle-class readership and was enormously popular.