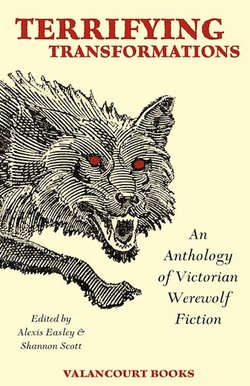 "From the summit of the ivy-grown tower, the very rooks, in the midst of their cawing, are scared away by the furious rush and the wild howl with which the Wehr-Wolf thunders over the hallowed ground." - G. W. M. Reynolds, Wagner, the Wehr-Wolf

This collection brings together fifteen chilling stories of lycanthropy and murder written from 1838 to 1896, all taken from their original appearances in Victorian periodicals and story collections, many of them reprinted here for the first time. This edition includes a new introduction by Alexis Easley and Shannon Scott, explanatory notes, and numerous rare Victorian werewolf illustrations.

This collection contains: "Hugues, the Wer-Wolf" (1838) by Sutherland Menzies, "The White Wolf of the Hartz Mountains" (1839) by Frederick Marryat, "A Story of a Weir-Wolf" (1846) by Catherine Crowe, excerpts from Wagner, the Wehr-Wolf (1846-47) by George W. M. Reynolds, "Lycanthropy in London; or, The Wehr-Wolf of Wilton-Crescent" (1855) by Dudley Costello, "The Gray-Wolf" (1871) by George MacDonald, "The Were-wolf of the Grendelwold" (1882) by F. Scarlett Potter, "The White Wolf of Kostopchin" (1889) by Gilbert Campbell, "A Pastoral Horror" (1890) by Arthur Conan Doyle, "The Mark of the Beast" (1890) by Rudyard Kipling, "The Were-Wolf" (1890) by Clemence Housman, "Dracula's Guest" (ca. 1892) by Bram Stoker, "The Other Side: A Breton Legend" (1893) by Eric Stenbock, "Morraha" (1894) by Joseph Jacobs, and "Where There is Nothing, There is God" (1896) by William Butler Yeats. An appendix of contextual materials is also included, featuring nonfiction articles from Victorian periodicals dealing with lycanthropy, Rosamund Marriott Watson's poem "A Ballad of the Were-wolf" (1891), excerpts from Sabine Baring-Gould's The Book of Were-Wolves (1865) and Laurence Housman's illustrations for Clemence Housman's The Were-wolf (1896).