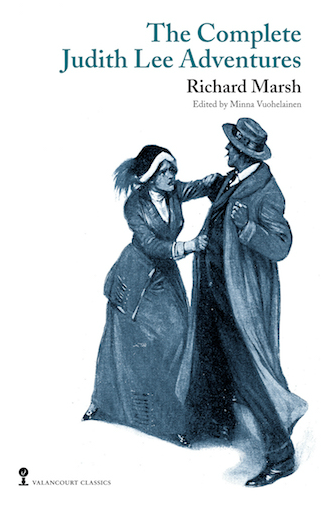 One of Sherlock Holmes's greatest rivals, a female detective who solves cases using her abilities in lip-reading and ju-jitsu, returns to print in this first-ever annotated, illustrated edition

The incredible popularity of Sir Arthur Conan Doyle's Sherlock Holmes stories led to an explosion in tales featuring fictional detectives, but few of them were as original or interesting as Richard Marsh's Judith Lee, whose stories appeared alongside Doyle's in Strand Magazine from 1911-1916.

"My name is Judith Lee. I am a teacher of the deaf and dumb. I teach them by what is called the oral system​ - that is, the lip-­reading system. I suppose I must have a special sort of knack in that direction, because I do not remember a time when, by merely watching people speaking at a distance, I did not know what they were saying. This knack of mine, in a way, is almost equivalent to another sense. It has led me into the most singular situations, and it has been the cause of many really extraordinary adventures."

Thus opens the first of Marsh's charming stories featuring Judith Lee, who thwarts murderers, robbers, burglars, con-men, and spies using her remarkable ability to read lips in multiple languages, along with her quick wits, innate intelligence, and skills in disguise and martial arts.

Best known today for his horror fiction, including The Beetle (1897), a Gothic thriller that initially outsold Bram Stoker's Dracula, Richard Marsh (1857-1915) is receiving increased attention in recent years for his other works, including the twenty-two Judith Lee stories, reprinted in full in this volume, along with the original illustrations from Strand Magazine and a new scholarly introduction and annotations by Minna Vuohelainen.