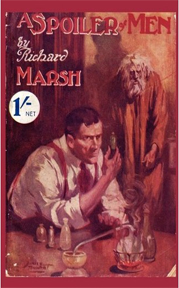 "It was a book called A Spoiler of Men, by Richard Marsh, and there was a repulsive crime on almost every page. It was Hot Stuff." - P. G. Wodehouse

"A Spoiler of Men is as good as The Beetle, and when one has said so much, it is difficult to find higher praise. . . . We may express the hope that this really excellent and thrilling novel will have the success it deserves." - Morning Post

Cyril Wentworth seems to have it all. A wealthy and handsome socialite with political ambitions and a fiancée who is a famous novelist, Wentworth is the envy of London society. But he also has a dark side. Years ago, as a student under the eminent chemist Professor Ehrenberg, Wentworth discovered a drug that with the prick of a needle could turn men into mindless zombies. Now he has a plan to use his secret weapon to secure a fortune, but a mysterious young woman knows his secret and is determined to stop him at all costs. Who is she? What is she after? And can she prevent Wentworth's evil designs, or will she become another one of his victims?

First published in 1905, A Spoiler of Men is, as Johan Höglund writes in his introduction, a roller coaster ride that blends horror, crime, and humour, and will keep readers guessing until its surprising conclusion. It is also, Höglund argues, quite possibly the first occurrence of zombies in English fiction. This new edition, the first since the 1920s, features the unabridged text of the first edition, a new introduction and notes, and a reproduction of the cover of the Victorian "shilling shocker" edition.