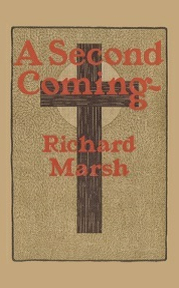 "We cannot help wincing, cannot help feeling that the author has committed an error of taste, cannot help hoping with all the vigour at our command that his example will not be followed. [...] We are compelled by conviction to express in clear terms the disfavour with which we regard audacious enterprises such as the one undertaken by the author of this novel." -- The Literary World, May 25, 1900

"Richard Marsh, author of A Second Coming, is the author also of 'The Beetle' and 'The Crime and the Criminal.' This, therefore, is his third coming. If one wishes to read one of his books, let it be 'The Crime' or 'The Beetle.' It may be better than 'A Second Coming.' It cannot easily be worse." -- The Critic, July, 1900

A Second Coming (1900) was the first attempt at serious literature by popular novelist Richard Marsh, and when it was published by the influential London publisher Grant Richards, whose publishing house helped launched the careers of George Bernard Shaw, G. K. Chesterton, and James Joyce, it appeared Marsh was on his way toward success as a respected literary writer. But the reviews were uniformly negative, decrying the book as blasphemous, and Marsh's bold and fascinating work was declared a failure and quickly consigned to oblivion.

In A Second Coming, Marsh imagines what would happen if the long-awaited second coming of Christ took place in present-day London. How would he be received in a modern, industrialized world that had begun to question the relevance of his teachings and had tacitly given up hope of his return? Surprising and thought-provoking, Marsh's novel and the questions it raises are perhaps as relevant as ever. This edition features the unabridged text of the novel, a reproduction of its original cover, and a new introduction by Paul Fox.