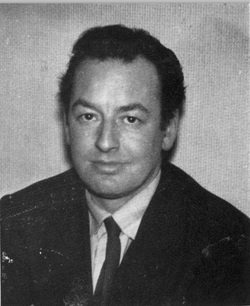 John Blackburn was born in 1923 in the village of Corbridge, England, the second son of a clergyman. Blackburn attended Haileybury College near London beginning in 1937, but his education was interrupted by the onset of World War II; the shadow of the war, and that of Nazi Germany, would later play a role in many of his works. He served as a radio officer during the war in the Mercantile Marine from 1942 to 1945, and resumed his education afterwards at Durham University, earning his bachelor’s degree in 1949. Blackburn taught for several years after that, first in London­ and then in Berlin, and married Joan Mary Clift in 1950. Returning to London in 1952, he took over the management of Red Lion Books.

It was there that Blackburn began writing, and the immediate success in 1958 of his first novel, A Scent of New-Mown Hay, led him to take up a career as a writer full time. He and his wife also maintained an antiquarian bookstore, a secondary career that would inform some of Blackburn’s work, including the bibliomystery Blue Octavo (1963). A Scent of New-Mown Hay typified the approach that would come to characterize Blackburn’s twenty-eight novels, which defied easy categorization in their unique and compelling mixture of the genres of science fiction, horror, mystery, and thriller. Many of Blackburn’s best novels came in the late 1960s and early 1970s, with a string of successes that included the classics A Ring of Roses (1965), Children of the Night (1966), Nothing but the Night (1968; adapted for a 1973 film starring Christopher Lee and Peter Cushing), Devil Daddy (1972) and Our Lady of Pain (1974). Somewhat unusually for a popular horror writer, Blackburn’s novels were not only successful with the reading public but also won widespread critical acclaim: the Times Literary Supplement declared him ‘today’s master of horror’ and compared him with the Grimm Brothers, while the Penguin Encyclopedia of Horror and the Supernatural regarded him as ‘certainly the best British novelist in his field’ and the St James Guide to Crime & Mystery Writers called him ‘one of England’s best practicing novelists in the tradition of the thriller novel’.

By the time Blackburn published his final novel in 1985, much of his work was already out of print, an inexplicable neglect that continued until Valancourt began republishing his novels in 2013. John Blackburn died in 1993.