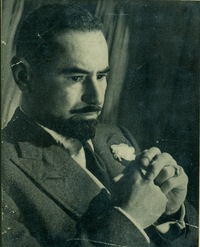 Kersh was a larger than life figure, a big, heavy-set man with piercing black eyes and a fierce black beard, which led him to describe himself proudly as “villainous-looking.” His obituary recounts some of his eccentricities, such as tearing telephone books in two, uncapping beer bottles with his fingernails, bending dimes with his teeth, and ordering strange meals, like “anchovies and figs doused in brandy” for breakfast. Kersh lived the last several years of his life in the mountain community of Cragsmoor, in New York, and died at age 57 in 1968 of cancer of the throat.