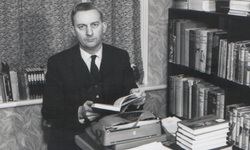 Copper published some fifty novels featuring the Los Angeles private detective Mike Faraday and also wrote several horror and supernatural novels and a number of collections of macabre short stories. His horror fiction in particular has been receiving renewed attention recently with new editions from PS Publishing and Valancourt Books. Basil Copper died at age 89 in 2013 after suffering from Alzheimer’s disease.