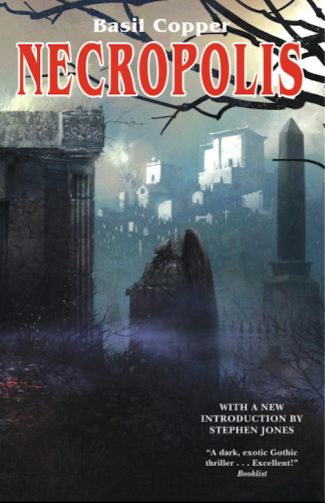 ﻿Necropolis (1980)﻿
Basil Copper
With a new introduction by Stephen Jones

Set in an alternate Victorian London, where Sherlock Holmes and Dr. Watson are not just fictional characters, Basil Copper’s Necropolis (1980) is a tale of mystery and intrigue worthy of Arthur Conan Doyle or Wilkie Collins.

Private detective Clyde Beatty, a rival of the great Holmes, has been hired by the lovely Angela Meredith to inquire into her father’s suspicious death. As Beatty’s investigation unfolds, the danger intensifies: more murders ensue, and attempts are made on his life. It is clear there is more to Mr. Meredith’s death than meets the eye, and it may have something to do with the brazen robbery of a fortune in gold bullion. The clues lead Beatty to the eerie Brookwood Cemetery, where fatal secrets lie hidden in the catacombs beneath a city of the dead. . . .

This edition of Copper’s chilling Victorian Gothic mystery is the first in more than three decades and includes the original illustrations by Stephen E. Fabian and a new introduction by Stephen Jones. Copper's tale of Lovecraftian horror, The Great White Space (1974) is also available from Valancourt Books.

“A feverish gaslight gothic that’s as rich in Sherlock Holmes-like atmosphere as it is in ghoulish doings.” – Kirkus Reviews

“A gothic mystery in the truest sense. . . . Copper has written in the grand tradition of A. Conan Doyle and created a spellbinding narrative of mystery and suspense.” – The Press-Courier

“It's quite amazing to think that a book that is so accessible and fun has been out of print for so long. Certainly anyone who relishes the steampunk novels of James Blaycock or any of the Holmes homages currently on the market should find it just the ticket for whiling away a foggy Autumn evening.” – Starburst Magazine 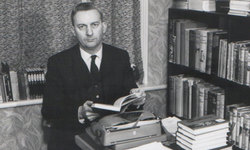