High above the Hungarian village of Lugos rise the towers of Castle Homolky, whose subterranean dungeons contain the remains of a chamber of horrors once used for the torture of enemies, and whose tragic and violent history has caused it to be known as The House of the Wolf. Into this legend-haunted region comes John Coleridge, an American professor and expert on lycanthropy, who is staying as a guest of Count Homolky while attending a conference on European folklore. After a villager is found dead with his throat torn out and a huge black wolf with seemingly preternatural powers is seen stalking the halls of the Castle, leaving scenes of bloody carnage in its wake, Coleridge and his colleagues must hunt the beast. But is the killer a wolf, or could the unthinkable be true: that one of the Castle’s inhabitants is actually a werewolf?

After the success of his Victorian gaslight Gothic tale Necropolis (1980), published by the legendary Arkham House, Basil Copper (1924-2013) returned with another atmospheric Victorian chiller, The House of the Wolf (1983). This new edition of Copper’s classic includes an introduction by the author discussing the influences on his novel, including Universal and Hammer werewolf films, an afterword by award-winning editor Stephen Jones, and more than 40 illustrations by Stephen E. Fabian.

“One of the last of the great traditionalists of English fiction.” – Colin Wilson

“An outstanding British writer in the genre.” – August Derleth 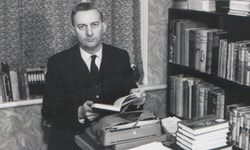