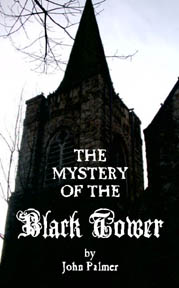 Set in the violent times of Edward III, when England is at war against the Scots and the French, The Mystery of the Black Tower is the story of young Leonard, who longs to escape the anonymity of his peasant's life.  Seeking to win fame and renown, Leonard enlists in England's army, where he earns knighthood and the favour of the King.

But when his true love, the beauteous Emma, is kidnapped and imprisoned in the haunted Black Tower, Leonard must save her.  Aided by his loyal but cowardly squire Owen, Leonard will face a series of adventures along the way.  Finally, he will have to face an old nemesis in a duel to the death and escape a troop of robbers before he can rescue Emma and discover the secret of his own birth!

Influenced by Don Quixote and Clara Reeve's The Old English Baron, The Mystery of the Black Tower was popular with the Gothic reading public upon its release in 1796.  Critically acclaimed in its own time, and influential on later writers such as Scott and Ainsworth, it ranks among the finest historical Gothic novels.  This edition includes a new introduction for modern readers, as well as the text of contemporary reviews.