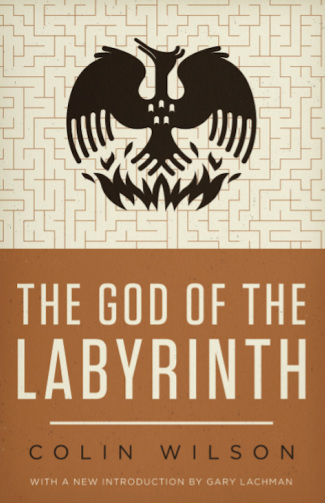 Gerard Sorme has been hired by a New York publisher to edit a book on Esmond Donelly, notorious 18th-century Irish rake, friend of Rousseau, Boswell and Horace Walpole, and author of a bawdy work on the deflowering of virgins. Sorme’s quest for information on Donelly takes him to the home of a pyromaniac and flagellant in Baton Rouge, the labyrinthine corridors of the British Museum, and a remote castle in Ireland. As he digs deeper into the mystery of Donelly, Sorme uncovers a tale of intrigue, conspiracy, and murder involving a secret society, the Sect of the Phoenix, that dates back to medieval times. But the Sect still exists, and Sorme’s researches have not gone unnoticed by powerful men who have their own reasons for wanting the truth about Esmond Donelly to remain hidden. . . .

The God of the Labyrinth (1970) is a novel in the mode of Jorge Luis Borges that explores two of Wilson’s major interests – philosophy and sex – in the form of a thrilling literary mystery. This edition, the first in more than 30 years, includes a new introduction by Gary Lachman and the original afterword by the author, in which he discusses the role of sex in literature and defends his work against charges of pornography.

He writes a clear, light prose, and he makes his interests, however bizarre, seem important.’ - Punch

‘One of the more earnest and interesting writers of his generation.’ - The Guardian

‘He has the kind of story-telling power which could charm the birds off the trees.’ - The Journal (Newcastle upon Tyne)