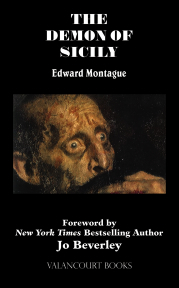 "Outstanding among the many pallid imitations of The Monk...the Gothic's Gothic of the first decade of the nineteenth century." -- Prof. Frederick S. Frank, The First Gothics.

The Devil stalks the monastery of Santa Catherina in the form of the mysterious Demon of Sicily, seeking new souls to plunge into everlasting torment. He sets his sights on Father Bernardo, a young priest questioning his vows, and Sister Agatha, a depraved and licentious nun. The Demon, a supernatural being of seemingly unlimited power, promises Bernardo and Agatha fulfilment of their wanton sexual urges, in exchange for their souls!

Inspired by M. G. Lewis's The Monk, The Demon of Sicily outdoes Lewis's novel in its outrageous depiction of sex and violence. Featuring a parade of victims who are kidnapped, imprisoned, impaled, decapitated, drowned, rent asunder by demons, and burnt at the stake, The Demon of Sicily is sure to astonish readers even today, two hundred years after its first publication!

This 200th Anniversary Edition includes the unabridged text of the rare 1807 first edition, together with seventeen lurid illustrations from the 1839 edition published by the infamous pornographer William Dugdale. This edition also features a new foreword by New York Times and USA Today bestselling novelist Jo Beverley, whose heroine reads The Demon of Sicily in her novel An Arranged Marriage.