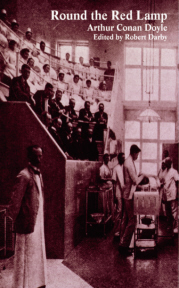 Round the Red Lamp (1894)
And Other Medical Writings
Arthur Conan Doyle, Edited by Robert Darby

When Round the Red Lamp appeared in 1894, readers and reviewers were appalled. Expecting tales in the style of Conan Doyle's popular Sherlock Holmes stories, readers were shocked to find instead harrowing medical stories involving childbirth, syphilis, and botched amputations.

The tales in Round the Red Lamp range in theme from the realistic to the bizarre in such stories as 'Lot No. 249', involving a reanimated mummy that stalks a young medical student, and 'The Los Amigos Fiasco', where a doctor's misconception about the effects of electricity brings about surprising results for a condemned prisoner. In addition to the fifteen stories in the original collection, this edition reprints three of Conan Doyle's other rare medical tales, including the chilling masterpiece 'The Retirement of Signor Lambert'.

In addition to being a prolific writer, Arthur Conan Doyle (1859-1930) was a medical doctor and the author of a variety of nonfiction articles and essays on medical subjects. This edition includes a selection of Conan Doyle's rare nonfiction medical writings, some of which have never been reprinted. As Robert Darby argues in the introduction to this edition, these stories and articles provide 'a rare glimpse into the world of a provincial GP at the moment when old-style medicine was dying and the modern medical profession was emerging'.

"Editor Darby, author of the admirable A Surgical Temptation: The Demonization of the Foreskin and the Rise of Circumcision in Britain, contributes a fine introduction and some helpful but brief notes to the individual pieces....The best of the bunch is the highly disturbing 'The Case of Lady Sannox,' in which a sadistic husband goads the surgeon sleeping with his wife into mutilating her lower lip with a scalpel." -- Library Journal, January 15, 2008

"In his informative introduction, Robert Darby argues that these texts are valuable as social history, capturing the practices of physicians at the cusp of modern medicine. To this end he contributes annotations, gathers medical stories by Doyle not found in earlier editions and includes Doyle's nonfiction medical writings. Round the Red Lamp should appeal to others besides historians and hypochondriacs, however. Some tales are ephemeral Victoriana, but others deal with issues that don't date: life, death, and the random workings of fate." -- Times Literary Supplement, November 2007 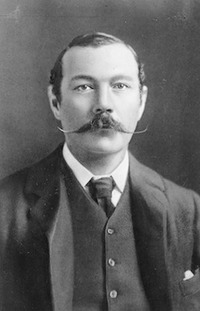 Sir Arthur Conan Doyle was born in Edinburgh, Scotland, the third of nine children of Charles and Mary Doyle. Charles Doyle, a gifted artist employed as a draughtsman, suffered from alcoholism and epilepsy, which frequently left Mary struggling financially as the sole stable parent in a growing Catholic household. Due to the family’s economic difficulties, Conan Doyle’s uncles offered to fund his education at Stonyhurst, a Roman Catholic boarding school run by a Jesuit order. Conan Doyle spent the next seven years matriculating at Stonyhurst in a strict, academically rigorous environment.

After graduating in 1875, Conan Doyle spent a year at Stella Matutina, a secondary school run by the same Jesuit order in Feldkirch, Austria. In his letters home to his mother, Conan Doyle vividly described the beauty of the Alps, which he hiked through while singing Tyrolese songs and consuming large quantities of beer with his fellow students. At Stella Matutina, Conan Doyle expanded his interest in German language and history and learned to play the bombardon (a tuba-like instrument) in the school marching band. In his spare time, he read Edgar Allan Poe voraciously and studied for the examinations to enter medical school.