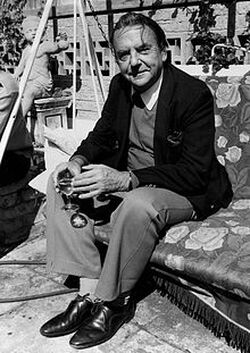 Robin Maugham was born Robert Cecil Romer Maugham in 1916, the son of Frederic Maugham, 1st Viscount Maugham, and Helen Romer, and nephew of the famous author W. Somerset Maugham. Educated at Eton and Cambridge, Maugham trained as a barrister but instead decided to follow in his uncle’s footsteps and pursue a career in literature.
​
Maugham served with distinction in World War II in North Africa, where he reportedly saved the lives of 40 men and sustained a head injury that resulted in blackouts. While convalescing from his wounds, Maugham wrote his first book, Come to Dust (1945), which drew on his war experiences. The book was praised by Graham Greene and sold well, convincing Maugham to continue writing full time. Over the next thirty years, Maugham would be one of England’s most popular writers, publishing some twenty volumes of fiction and a dozen nonfiction works, including travel writing, biographies of his uncle, and the autobiography Escape from the Shadows (1972), which dealt frankly with the three “shadows” over Maugham’s life: his father, his uncle, and his own homosexuality. Maugham was also a prolific playwright, writing scripts for stage, radio, and television.