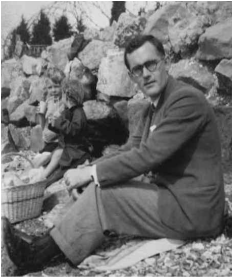 Parry published his first novel, Attic Meteor (1936) at age 24, and would go on to publish nine others. None of these books achieved large sales, though they generally earned good reviews. An obituary in the Times characterized Parry’s works as “entertaining on the surface, and written in an easy, forceful prose . . . continuously witty rather than comic, and penetrating rather than profound. . . . All his books are enjoyable, and almost all successful within the limits which Parry set himself.” His final book, Sea of Glass (1955), was probably his most successful, earning widespread critical acclaim and running into a second edition. Unfortunately, the book’s modest success was overshadowed by Parry’s death shortly after its publication; he was severely injured in a car accident in June 1955 and died two days later at age 42.