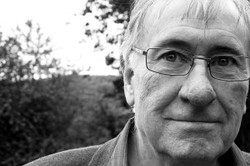 His most recent novel, The Adjacent, was published in the U.S. in April 2014.