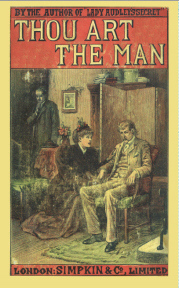 Ten years ago, a shocking murder cut short a blossoming romance between beautiful young heiress Sibyl Higginson and her cousin Brandon Mountford. When Mountford, an epileptic subject to seizures and memory loss, awakened near a bloody corpse, he was forced to escape to avoid execution for the crime. The years passed, nothing was heard of Mountford, and it was supposed he had either died or fled the country.

A decade later, Sibyl, now Lady Penrith, is travelling along a desolate moor when a crazed man stops her carriage and hands her a scrawled note. Believing the note to be from Mountford, Sibyl sets out to investigate, and with the help of her niece Coralie Urquhart she will uncover the long-hidden truth behind the murder and the horrible fate of Brandon Mountford!

Thou Art the Man (1894) is a thrilling and fast-paced novel of murder and mystery. It is also, as Laurence Talairach-Vielmas discusses in her introduction to this edition, a fascinating look at the ways Braddon adapted late-Victorian theories of heredity, disease, and criminology into her fiction. This edition reprints the unabridged text of the 1895 "yellowback" edition, complete with a facsimile of its cover, and includes a new introduction and explanatory notes.

Braddon and Maxwell had several children, including William B. Maxwell (1866-1938), a once-popular but now neglected novelist. Around 1891, John Maxwell’s health began to deteriorate; he died in 1895. Braddon survived him by twenty years, continuing to write prolifically, primarily in the genre of the “sensation novel,” until her death in 1915 from a cerebral hemorrhage at age 79. Her final novel, Mary, appeared posthumously in 1916.