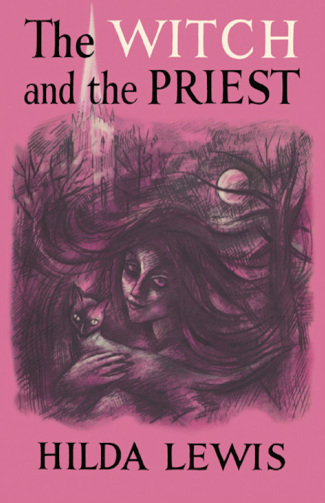 Samuel Fleming, an aging priest, is tormented by doubts on the case of Joan Flower and her daughters Margaret and Philippa, whom he helped condemn to death as witches in 1618. Were they guilty? Was justice done? Did he do all he could to save their souls? The spirit of Joan Flower appears to him and tells him that she has been rejected by both Heaven and Hell and is condemned to wander the earth. She unfolds a story of horror, telling how she and her daughters became witches, participated in orgies at the witches' sabbath with the Devil himself, cast spells to kill and torment their enemies, and eventually faced trial and execution. As Samuel listens, he tries desperately to find some way to save the witch's soul. And the stakes are high: for as the witch tells her horrifying tale, Samuel realizes that hers is not the only soul in jeopardy, and if he fails, he may be joining her in Hell!

Hilda Lewis (1896-1974), a prolific author of historical fiction, ranked The Witch and the Priest (1956), based on the real-life case of the Witches of Belvoir, as her own favourite among her many novels. In creating this masterpiece of historical fiction, Lewis conducted extensive research on the case and on early works of witchcraft and demonology, resulting in a novel that is both compulsively readable and historically accurate. This new edition is the first in more than 40 years and includes an introduction by bestselling historian and novelist Alison Weir, and the original jacket art by Evelyn Gibbs.

"Strange terror fills this tale of seventeenth-century witchcraft . . . horrific and written with much skill." - Daily Telegraph

"The atmosphere of hatred, fear and bestial excitement is evoked with horrible fascination." - Birmingham Post

"This novel by Hilda Lewis is one of the best I have ever read about witchcraft." - Dennis Wheatley

Hilda Lewis was born in London in 1896. She began writing at an early age, editing her school and college magazines, then worked as a teacher in London. She married in the early 1920s and moved to Nottingham, where her husband was appointed to the old University College as a lecturer in education. They had one son, Humphrey. Thereafter, she devoted herself full-time to writing. She published more than thirty books, including both adult and children’s fiction, and much of her writing was in the genre of historical fiction. Her children’s novel The Ship That Flew (1939) remains in print with Oxford University Press and has become recognized as a classic of children’s literature. Her novel The Day is Ours (1947) was filmed as Mandy (1952), with a screenplay by Nigel Balchin. The Witch and the Priest (1956), Lewis’s own favourite among her novels, was republished several times through the 1970s, when it was included in the ‘Dennis Wheatley Library of the Occult’ series and reissued in America to coincide with the popularity of films such as The Exorcist (1973). Several of Lewis’s best historical novels have recently been reprinted by The History Press. Hilda Lewis died in 1974.﻿
Valancourt Books | PO Box 17642, Richmond, VA 23226 | 804.873.8528 | email
Copyright © 2022 by Valancourt Books, LLC. All rights reserved. Valancourt Books® is a registered trademark of Valancourt Books, LLC.
Banner art by M.S. Corley