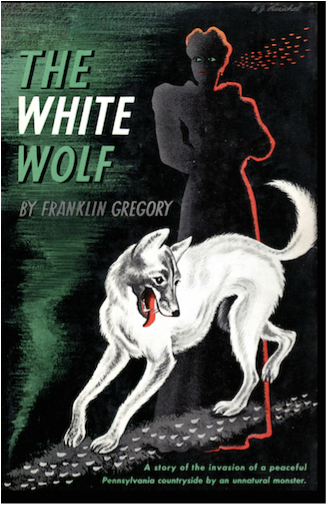 In the heart of the superstitious Pennsylvania Dutch country stands the mansion of Pierre de Camp-d’Avesnes, whose family history dates to the 12th century, when, according to family lore, an ancestor made a deal with the devil. As part of the bargain, the legend says, every seventh generation a terrible curse is visited upon the eldest child of the family. Recently strange things have begun to happen: children are being savagely murdered, a mysterious white wolf has been sighted, and Pierre’s daughter Sara has been behaving oddly. Is the curse to blame, or is there a rational explanation? Desperate to uncover the truth, Pierre enlists the aid of cynical journalist Manning Trent and psychiatrist and occult expert Dr. Justin Hardt. It’s a race against time to save Sara and stop the killings as modern-day science and skepticism are pitted against medieval magic and superstition in this suspenseful thriller.

Praised by contemporary critics and recognized by horror scholars as considerably ahead of its time, Franklin Gregory’s The White Wolf (1941) is one of the best werewolf novels of its era. This new edition features the unabridged text of the first edition and a reproduction of the original jacket art.

“A horror story the like of which is not often seen … a tragic tale and one calculated to chill the blood of any reader whose nerves are not well under control.” – New York Times

“Twentieth-century American version of loup garou lore handled with due regard to traditional trappings and plentiful thrills . . . Scary!” – Saturday Review

Franklin Long Gregory was born in 1905. He received a bachelor’s degree in journalism from the University of Iowa and began working for The Philadelphia Record in 1936. Around this time, Gregory published the first of his two novels, The Cipher of Death (1934), which would later be followed by The White Wolf (1941). In 1947, Gregory joined the staff of The Star-Ledger of Newark, N.J., where he worked for 25 years, including 20 years as the chief of the Trenton bureau, where he wrote a weekly column. He died in 1985.