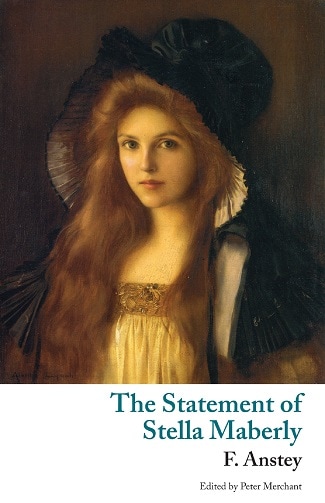 ﻿The Statement of Stella Maberly (1896)﻿
F. Anstey
With a new introduction by Peter Merchant

After her father loses his fortune, Stella Maberly is forced to go into service as a paid companion to her former schoolfellow, Evelyn Heseltine. When Stella finds Evelyn one morning apparently dead from an accidental--or perhaps intentional--poisoning, she is shocked and horrified. But it is nothing compared to her horror when Evelyn reawakens. Stella believes her friend's body is animated by something evil. Is Stella insane, or has a spirit of darkness actually taken possession of Evelyn?

When originally published in 1896, The Statement of Stella Maberly was subtitled 'Written by Herself' and presented as the real-life confession of a possibly mad woman, but the identity of the book's true author, F. Anstey (1856-1934), famous for his oft-filmed bodyswap novel Vice Versa (1882), was soon revealed. This first-ever scholarly edition of Anstey's lost classic features a new introduction and notes by Peter Merchant, plus the first-ever appearance of unpublished manuscripts pertaining to the novel, including a 1916 screenplay for a never-produced film version, An Evil Spirit.

‘A very curious and interesting story ... either a study of hallucination, of madness ... or else it is a sober statement of how, on a young girl's death, her body was revivified by a wandering spirit ... The book has very great interest ... written very skilfully and convincingly’--The Review of Reviews

‘A unique and weird experience’--The Literary World
​
‘Has a kinship with Dr. Jekyll and Mr. Hyde ... a most striking tale’--Godey's Magazine
​