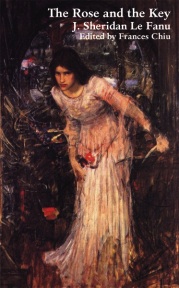 The Rose and the Key (1871)
J. Sheridan Le Fanu, Edited by Frances Chiu

A beautiful young heroine - A cruel and unfeeling mother - A one-eyed spy - A mesmerist - A lunatic asylum. These are the perfect components for a Victorian sensation novel, and in The Rose and the Key, J. Sheridan Le Fanu weaves them into a thrilling Gothic mystery.

The terror builds slowly, as young Maud Vernon and her old cousin Maximilla enjoy a sketching tour through Wales. Ominously, they find themselves shadowed by a sinister one-eyed man. And when they return to Roydon Hall, Maud's home, things become yet worse. Her mother, the imperious Lady Vernon, seems to loathe her, and there are other concerns as well-a mysterious will, an intimidating man clothed all in black, and the satanic mesmerist Doctor Antomarchi. Le Fanu slowly unfolds his plot, building the mystery and suspence until the shocking climax, where Maud escapes her cruel mother to visit the home of the great Lady Mardykes, only to find that she has escaped one hell, only to enter one far worse!

This edition is the first to follow the original text, as serialized in Charles Dickens's weekly All the Year Round in 1871. Featuring notes, the text of contemporary reviews, and contextual documents such as a letter from Dickens to Le Fanu, this is the first-ever scholarly edition of the novel. Highlighting this edition is a groundbreaking new introduction by Frances Chiu, which argues for consideration of The Rose and the Key as Le Fanu's statement on the troubled relations between England and Ireland and calls for a reevaluation of his ideology and politics.