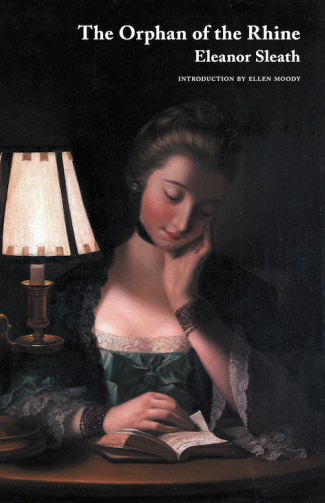 Seduced and betrayed by a rake, Julie de Rubine lives in seclusion with her infant son, Enrîco. One day, their calm retirement is interrupted by the Marchese de Montferrat, who promises to provide for Julie and her son if she agrees to care for an unfortunate orphan, Laurette, whose origin is shrouded in mystery. Under the assumed name of Madame Chamont, Julie raises the two children, whose youthful friendship eventually blossoms into love.

As Laurette matures, she resolves to learn the identity of her real parents. Her only clues are a painted miniature of a beautiful lady and the whisperings of a sinister monk, who warns her to avoid the Marchese de Montferrat. But when Julie is kidnapped by banditti and Laurette is taken to the gloomy castle of the lascivious Marchese, will she be able to uncover the truth and marry her beloved Enrîco, or will she fall victim to the lustful Montferrat?

The rarest of the seven “horrid novels,” Eleanor Sleath’s The Orphan of the Rhine (1798) is indebted to Ann Radcliffe’s The Mysteries of Udolpho (1794) and Regina Maria Roche’s The Children of the Abbey (1796) but possesses a charm and fascination all its own. This new edition, the first in 50 years, includes a new introduction by Ellen Moody.

“It is a strangely attractive absurdity, which excites a sort of sugary fascination over the reader.” – Michael Sadleir

“An elegantly composed anthology of Germanic terror and gloomy topographical grandeur . . . Sleath’s management of violent incident, genealogical procrastinations and complications, and the allurement of ruins often equals the finesse of [Ann] Radcliffe herself. Everything about this Gothic romance seems expertly designed to excite the palate of Jane Austen's Catherine Morland and the legions of . . . readers with similar tastes.” – Prof. Frederick S. Frank, The First Gothics