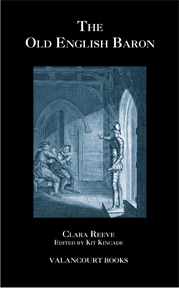 Sir Philip Harclay returns to England after the Crusades, anxious to see his friend Lord Arthur Lovel. But to his dismay, when he arrives at Lovel Castle, he finds his friend is long since dead. However, in a young peasant named Edmund, Sir Philip believes he sees a close resemblance to the late baron. As events unfold, a haunted chamber, a suit of armour, an apparition, and a duel to the death will reveal Edmund's true origin and Lord Lovel's mysterious fate!

The second major Gothic novel, following Horace Walpole's The Castle of Otranto (1764), and the first written by a woman, The Old English Baron was extremely popular upon its initial publication and has rarely been out of print. This new edition includes the unabridged text of the original 1778 edition, along with reproductions of its title page and frontispiece, and features a new introduction and notes by Kit Kincade. Also included in this edition is the complete text of John Broster's scarce 1799 dramatic adaptation of the novel, Edmond, Orphan of the Castle, never before republished.