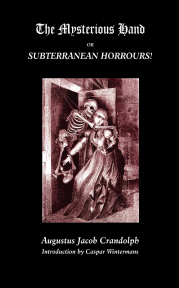 The Mysterious Hand; or, Subterranean Horrours! (1811) is the story of two young lovers, Theodore Dalbert and Julia Bolton, and their attempts to escape the machinations of the diabolical Count Egfryd. Egfryd, one of the most remarkable villains in Gothic literature, is a gifted athlete, poet, and inventor, brilliant, handsome, charming - and ruthless. Angered at Theodore's negative review of the his book of poems and enamoured of Julia, Egfryd will stop at nothing to destroy his rival and possess the lovely maiden.

Egfryd's wild and improbable schemes include framing Theodore for murder, attempting to rape Julia in a hot air balloon, and finally imprisoning them both on a remote island rigged with gunpowder to blow them both to bits should they attempt to escape. Can the two lovers avoid the snares of the wily Count or will they fall victim to his inveterate malice?

A Gothic novel remarkable both for its rarity (fewer than five copies are known to survive) and its originality, The Mysterious Hand is a lost gem that will be enjoyed by readers, collectors, and specialists of Gothic fiction. And perhaps even more surprising than its unique plot are the modern views the author expresses on such issues as capital punishment, criminal justice, marriage, and sexuality. This edition includes a new introduction and notes by Caspar Wintermans as well as a reproduction of the title-page of the first edition.